Taylor Made Stallions’ Instilled Regard, a Grade 1 winner and four-time Graded stakes winner, sired his first reported foal when a filly out of the stakes-winning and stakes-producing Malibu Moon mare Hung the Moon was born on Thursday, Jan. 13. OXO Equine bred the filly. Hung the Moon is the dam of the stakes-winning and multiple Graded stakes-placed Brill, an earner of $235,540, and her most recent yearling—a colt by Quality Road—sold for $800,000 to Maverick Racing at last year’s Fasig-Tipton Saratoga Sale. 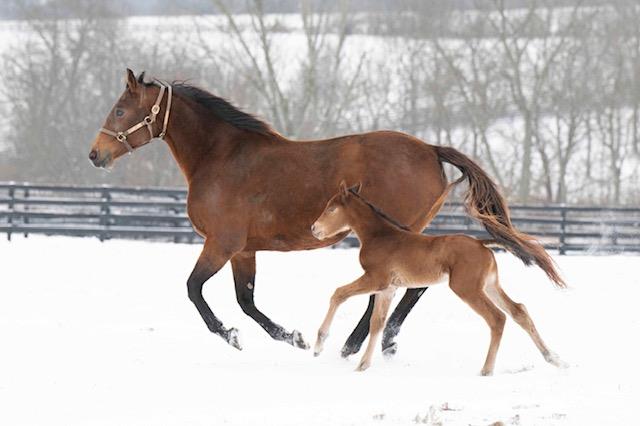 Royally-bred Instilled Regard is a Grade 1 winner and near millionaire earner of $983,240. The son of Arch was a $1.05 million OBS March 2-year-old purchase and is produced from the winning Forestry mare Enhancing who is a half-sister to Champion 2-Year-Old Filly Heavenly Prize, the dam of Pure Prize. Instilled Regard hails from a deep Ogden Phipps family replete with influential stallions Roberto, Danzig, Storm Cat, and Seeking the Gold all within the first three generations.

Versatile and precocious, Instilled Regard captured four Graded stakes on dirt and turf in his sensational racing career. His biggest victory came in the 2020 Manhattan S. (G1) at Belmont Park where he defeated six Graded stakes winners, including Grade 1 winners Sadler’s Joy and Channel Maker.

Instilled Regard proved a dominant 4 ¼-length maiden special weight winner in his 2-year-old debut at Santa Anita and was runner-up in the Los Alamitos Futurity (G1) by a head to multiple Grade 1 winner McKinzie.  At three the following year, he jumped on the Derby trail after an impressive win in the Lecomte S. (G3). Ranked as high as No. 6 on Steve Haskin’s Derby Dozen, Instilled Regard finished just behind undefeated Triple Crown Champion Justify, Eclipse Champion Good Magic, and Grade 1 winner Audible in that year’s Kentucky Derby (G1), running the fastest final quarter-mile of the four.

Instilled Regard is standing his second season at stud for $7,500 S&N. For more information about Instilled Regard, contact Travis White or Liam Benson at (859) 885-3345.