Taylor Made Stallions’ Instagrand sired his first reported foals when a filly out of Grade 1 winner Concrete Rose was born on Jan. 10, and a colt out of the Tiznow mare Siesta was born on Jan. 8. 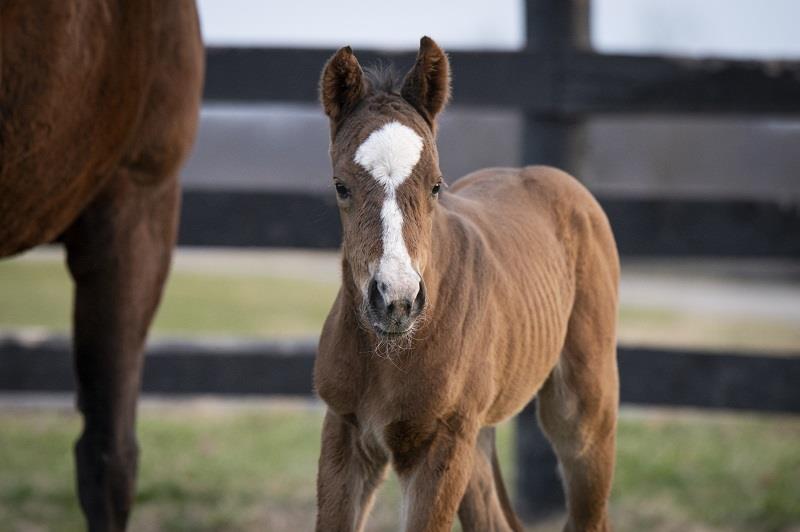 Concrete Rose, a daughter of Twirling Candy out of the winning Powerscourt (GB) mare Solerina, was a $1,950,000 Keeneland November acquisition in 2020 by OXO Equine LLC, which also bred the filly. Concrete Rose enjoyed a stellar racing career in which she annexed the $750,000 Belmont Oaks Invitational S. (G1), the Edgewood S. (G3), Florida Oaks (G3), and the Saratoga Oaks Invitational S. at Saratoga at three in 2019. At two, she won the Jessamine S. (G2) at Keeneland. All told, Concrete Rose captured six of seven lifetime starts—five of them stakes—and banked $1,218,650.

Siesta, a daughter of Tiznow out of the Harlan’s Holiday Miz Kella, is a half-sister to recent Zia Park Distaff S. winner Canoodling and hails from the immediate family of Champion 2-Year-Old Shanghai Bobby, winner of the 2012 Breeders’ Cup Juvenile (G1) and that year’s Champagne S. (G1). Siesta was a $240,000 graduate of the 2018 OBS Spring Sale where she was purchased by Eclipse Thoroughbred Partners. Siesta’s colt was bred by Jay Goodwin, Michael Hore, DVM, and Doc Atty Stables.

Instagrand, a dominating son of Into Mischief, led gate to wire to win the 2018 Best Pal S. (G2) at Del Mar by 10 ¼ lengths in just his second career start. Undefeated at two, Instagrand was named a TDN Rising Star after debuting a 10-length maiden special weight winner, running five furlongs in :56 flat and stopping the clock just .32 of a second off the Los Alamitos track record.

A $1.2 million Fasig-Tipton Gulfstream sale topper after breezing in :10 flat, Instagrand followed up his sensational juvenile season by placing in a pair of key Kentucky Derby preps at three.  He placed in the Gotham S. (G3) at Aqueduct and set the pace in the Santa Anita Derby (G1) in his two-turn debut, finishing just behind Roadster and Champion 2-Year-Old and Breeders’ Cup Juvenile (G1) winner Game Winner.

By perennial leading sire Into Mischief, Instagrand is produced from the winning Lawyer Ron mare Assets of War and is from the immediate family of Grade 1 winners Irish Smoke and Book Review. He bred 190 mares in his initial season at stud and he will stand the upcoming breeding season for $7,500 S&N. For more information about Instagrand, please contact Travis White or Liam Benson at (859) 885-3345.