Mshawish’s 3-year-old colt Sainthood won a spirited stretch duel over The Reds to win the $200,000 Pennine Ridge S. (G3) Saturday at Belmont Park to become his sire’s first graded stakes winner. Also a Taylor Made Keeneland sales grad, the colt bred in Kentucky by Edward Taylor and Springland Farm was making his first start since the May 1st Kentucky Derby (G1). 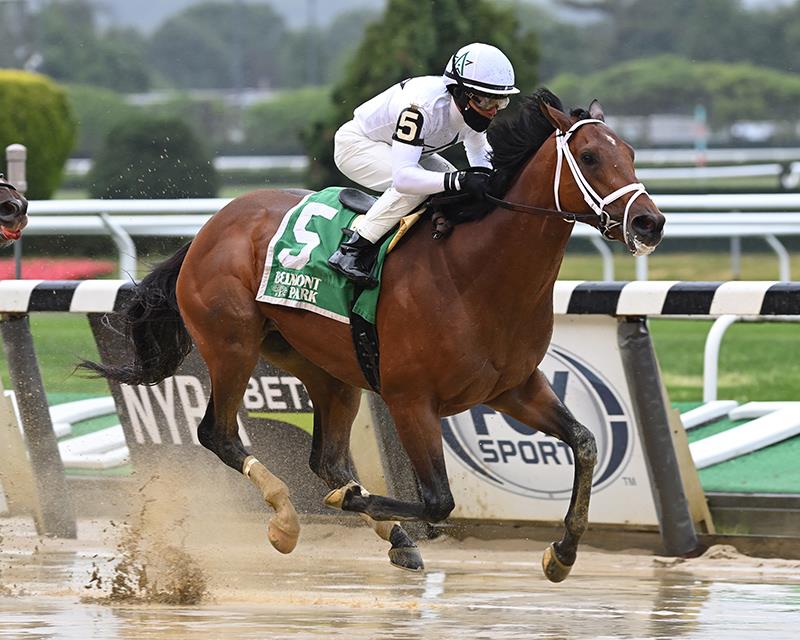 Originally scheduled for the turf, the 1 1/8-mile race was moved to the main track due to prolonged rain in the area. Away first in the field of five 3-year-olds, Sainthood, Shawdyshawdyshawdy and The Reds dueled for the top spot through six furlongs in 1:12.52. The Reds took the lead in upper stretch, but Sainthood battled back to take over for good in the final sixteenth to win by a length. The winner finished in 1:50.57 over the sloppy going.

“I think he’s a versatile colt, much like his sire Mshawish, who we trained and won graded stakes on dirt and turf for us,” said trainer Todd Pletcher. “This horse has run well on dirt and synthetic and slop today. I thought he actually ran a solid race in the Derby. He didn’t disgrace himself by any means for a colt as lightly raced as he was. His two works here on the turf I thought were pretty impressive. We came into today hoping to get him on the turf, but it’s also great to have one as versatile as he is who can run on just about anything.”

Prior to the Derby, Sainthood was second after a rough trip in the Jeff Ruby S. (G3). Owned by WinStar Farm and CHC Inc., his lifetime mark now stands at 2-2-0 in five starts, with earnings of $201,900.

Pletcher said Sainthood could make his next start on the turf in the $1 million Belmont Derby (G1) July 10 at Belmont.

“We got a good prep for it if we decide to go that way,” Pletcher said. “It’s good to have a horse with this many options. We’ll talk to the team and come up with a plan, but that will be towards the top of the list.”

Mshawish is a top-10 Second-Crop sire by stakes horses, adding Spectatorless, who placed in the $100,000 Jersey Derby, to his sire’s black-type list on Friday.